““Nothing revives the past so completely as a smell that was once associated with it,” according to Vladimir Nabokov. That’s why an acquaintance recently asked me to name a word for aromas that re

vive lost memories, and I thought it’d b

e a snap. Foolish me. The best I could find initially was “sillage,” defined by OxfordDictionaries.com as “The degree to which a perfume’s fragrance lingers in the air when worn,” but that doesn’t quite fit, and “orthonasal olfaction,” a clinical phrase for smelling also misses the mark.

The closest so far is “olfactory memory” from a Psychology.Today.com article by Amanda White describing how “the piercingly fresh scent of snow” instantly transported her back to childhood memories of sledding. “That complex emotion and memory can be triggered by a simple sensory cue: the smell of winter air. How do smells trigger such strong emotions and memories? The answer is likely due to brain anatomy. Incoming smells are first processed by the olfac 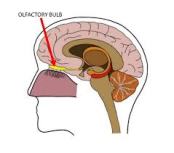 tory bulb, which starts inside the nose and runs along the bottom of the brain. The olfactory bulb has direct connections to two brain areas that are strongly implicated in emotion and memory. This may be why olfaction, more than any other sense, is so successful at triggering emotions and memories.”

The smell of old books causes many Americans to flash back to early public library experiences. Last year the Heritage Science Journal reported the creation of a Historic Book Odor Wheel designed to determine the types and amounts of aromas, kno

wn as volatile organic compounds, or VOCs, produced by decomposing paper and glues. Benzaldehyde, for example, smells like almonds and burnt sugar, while

hexanal is like rancid fat. Using the wheel, conservationists can tell what parts of the books are deteriorating and counter it.

“Szag” is “odor” in Hungarian, “haju” in Finnish, “arogl” in Welsh, and “nioi” in Japanese. The Japanese eat less meat and don’t sweat or smell as much as

Americans, but, according to a JapanTimes.co.ja article, they “stop short of saying we smell like cattle. We are merely kusai — stinky.” This makes sense when considering how odor-conscious the Japanese are; their public toilets gleam and are equipped with elaborate modern gadgetry. CNN reporter

Amanda Sealy wrote, “I will always remember the first time I walked into a Tokyo bathroom and, with the automatic lift of its lid, a Japanese “smart toilet” happily greeted me. It didn’t end there. Mounted to the wall was a panel of buttons, illustrated by stick men and symbols open to wild interpretation. It transpired that they controlled fun

ctions such as toilet seat heating, the water pressure level of the electronic bidet, and music to cover, er, embarrassing noises. I had just one question: Which one was for the flush?”

Their toilets are haunted, though. “Get to Know Your Japanese Bathroom Ghosts,” an online article by Eric Grundhauser, said, “when it comes to conjuring up the most terrify

ing possible interruptions to our most private moments, no one beats Japan. In Japanese folklore, there are a number of spirits rumored to appear in bathrooms.” For instance, Aka Manto, or “Red Cape,” usually appears in to those in the last stall looking like someone completely covered in red cloth or paper. He offers them red paper or blue paper. Choose red and your back gets flayed until you die. Choose blue and you’re smothered. Escape comes from saying you’re fine.

The Japanese word for bibliomaniacs is “tsundoku.” A Bookstr.com article and Angela Liao, “Book-Lovers, Are You Guilty of ‘Tsundoku’?” says it “implies the act of buying books but never reading them,” or, as the LA Times puts it, “suffering f

rom book stockpiling syndrome.” “The extent to which you have ‘tsundokursed’ can be measured on the tsundoku scale that ranges from one or two unread books to a serious hoard like what Frank Rose did.” Rose collected 13,000 volumes he intended to read upon retiring but wound of donating 500 boxes of them to his Sacramento library.

Mr. Rose might not have read them, but he certainly enjoyed smelling them. As Ray Bradbury noted, “A computer does not smell …

if a book is new, it smells great. If a book is old, it smells even better… And it stays with you forever. But the computer doesn’t do that for you. I’m sorry.”