This week I tried not to dwell on the marvelous Blackwing 602 pencil, but then NYMag.com’s Christopher Bonanos wrote an article titled “Favorite Pencil Was Used by Chuck Jones to Draw Bugs Bunny.” Chuck Jones, the l

egendary creative force behind the beloved Loony Tune cartoons, always drew with a Blackwing, which “are black, with oddly shaped metal fittings

holding their white erasers in place … they are the best writing pencils on earth … Most of all, they are a source of tiny pleasure every single time you put one to a sheet of paper.”

That coincided with listening to a library audio book, “A Curious Man: The Strange and Brilliant Life of Robert ‘Believe It or Not’ Ripley.” Ripley’s immense impact on American popular culture is largely forgotten today, but once his newspaper feature had 80 million readers. He ran with Damon Runyon, the Marx Brothe

rs, and George Gershwin, but his best pal was Arthur “Bugs” Baer a fellow newspaperman whose “One Word Leads to Another” column had 15 million readers. As John Adcock’s biographical

article stated, “Baer published little in book form,” but was one of the most famous humorists of the teens and twenties.” Samples include nicknaming Babe Ruth “the Sultan of Swat,” writing, “Allen S. Sothoron pitched his initials off yesterday,” and “there is a time and place for everything, except a wet nose in a small apartment.”

Baer began as a sports cartoonist whose work included small, baseball-shaped figures he called “bugs” that wisecracked around his drawings. The nickname stuck, and was later applied to other funny men, including B

en “Bugs” Hardaway, whose cartoon rabbit creation became known around the Warner studios as “Bug’s bunny” before Chuck Jones revamped the character. But this column’s not about pencils or bugs; it’s about library heroes, like Norbert Pearlroth, a library user extraordinaire and Ripley’s amanuensis. “Amanuensis,” according to OxfordDictionaries.com, is “a literary or artistic assistant, in particular one who takes dictation or copies manuscripts.” The term comes from the cobbling the Latin words “a manu” (“slave of the hand”) and “ensis” (“belonging to”).

Our local library has had its share of heroes, beginning in 1909 when Philadelphia philanthropist George C. Thomas paid for constructing the old log cabin library. But library heroes come in myriad forms and I’ve known many working at the borough’s public libraries. One of the first I met, Plant Kingdom owner Cyndie Warbelow-Tack, was recently featured in the News Miner. The parking lot planters outside Noel Wien Library were empty when I arrived in 1990, due to the Borough’s Parks department be

ing miffed over not being consulted ahead of time about the planter’s installation. So Cyndie and her family appeared at the library one Sunday and roto’ed the planters and filled them with plants leftover from their Pleasant Valley greenhouses. Eventually, the parks department began maintaining the planters with the same scrupulous dedication they bring to keeping Weeks Field park surrounding the library.

Another hero was Reverend Richard Kraiger, pastor at Fairbanks Lutheran Church across from the library. Rev. Kraiger passed away last April, and I recalled how a 1995 display sponsored by the Parents and Friends of Lesbians and Gays appearing in the library set off hysteria. A crowd in the library pa

rking lot was whipped up by hotheads urging the mob to break into the library and destroy the display. Rev. Kraiger heard the commotion, jumped on the back of a nearby pickup, spoke about how libraries should represent all points of view, and they dispersed contritely.

Norbert Pearlroth was a special type of library hero: an avid library user. He Austria-born, “tall, handsome, and always the smartest in his class, possessing a near photographic memory. And he was Ripley’s “amanuensis.” For $25 a week, and to his wife’s dismay, Pearlroth toiled daily in the New York Public L 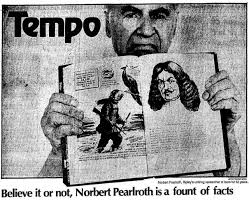 ibrary to unearth and authenticate the strange things Ripley used in his cartoons. “Pearlroth felt he had found, somewhat remarkably, the dream job. Research and information had long been his hobby, but now he got paid to spend time among dusty history and reference books.” I know how he felt.