Playwright Chu-Win observed that “Life is perhaps most wisely regarded as a bad dream between two awakenings, and every day is a life in miniature.”  That came to mind while reading about flea circuses in a library bookmobile book, “In Miniature: How Small Things Illuminate the World” by Simon Garfield.  The first known domestication of fleas for entertainment purpose

led him to leash fl
eas to tiny gold threads.  He drummed up business by attaching fleas to small chains and locks.  The first full-blown flea circus was staged in London in the 1820s by an Italian named Bertolotto, who found that female fleas were preferably to lazy males.

Such impresarios are called “fleamasters,” and according to Garfield, “Fleamasters discovered that only the human flea (Pulex irritans), as opposed to the cat or dog flea, was sufficiently large and intelligent to carry on circus

duties … Eastern European fleas were favored over less-robust specimens from the West. ”  Successful fleamasters sorted their fleas, separating out those disinclined to jump, because their acts depended on active, leaping, and agitated fleas, who apparently performed gymnastics, hauled chariots, fought duels, and impersonated famous people.   “And fleas did appear to jump through hoops, and walk a tight rope, not because they had been trained to do so, but because they had been so restrained.”

In a chapter on tiny books Garfield describes “Shiki no Kusabana,” a book of flowers 0.07 millimeters square created by Dr. Arno Gschwendertner that would look like a speck of dirt on your fingertip.  It requires a magnifying glass to read, because it’s not just a miniature, or microminiature, but an ultra-mi

crominiature.  Gschwendertner also made a Complete Sherlock Holmes that’s 2 by 1.5 inches and legible without magnification.  Fortunately Conan Doyle’s books are no longer copyrighted and can be reprinted legally, thanks to a 2019 law that shifted the copyright dates.  Copyrights used to run out after 28 years and w

ere gradually increased annually, but in 1998 Congress extended the copyright protection by twenty years, from 75 to 95 years after a work’s original publication.  It’s known as “the Micky Mouse Act,” due to the incredible pressure the Disney empire employed to keep “Steamboat Willie,” the first Mickey Mouse film, out of public domain until 2024.

When it comes to selling books, the miniature description-cum-exhortation known as the blurb is a constant standby.  “Blurb” was popularized by San Francisco humorist Gelett Burgess who mocked excessive praise printed on boo

k jackets.  At a 1907 book trade show Burgess presented his new book, “Are You a Bromide?” with “YES, this is a ‘BLURB’!” being yelled by a picture of a young woman “in the act of blurbing” on the jacket.  “To blurb,” Burgess told the crow 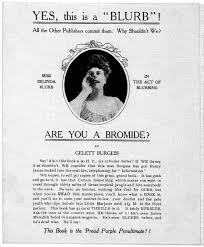 d, “is to make a sound like a publisher.”  The original blurb dates back to Walt Whitman, who equaled the fleamasters in self-promotion.  In 1855 he sent Ralph Waldo Emerson a copy of his newly published book: “Leaves of Grass.”  Emerson replied with a nice letter which included the phrase “I greet you at the beginning of a great career,” which Whitman had stamped in gold on the front covers of the second edition.

Over 300,000 books were released last year by mainstream publishers (versus self-publishers), straining blurb writers’ capacities.  The founder of Codex Group, an independent research firm, says two factors are key to successful blurbs: if the reader cares about the blurber,  and if it helps understand what

the book’s about, and “even when the blurber is a reader’s favorite author … such recommendations have only a modest influence on their buying habits.”  Many blurber’s crank out th

eir praise, as I hope Rick Bass did on his blurb for the novel “Cold Mountain,” which the estimable Kirkus Reviews called “somewhat submerged by the weight of lyrical detail piled on the tale, and by the slow pace of the telling … a promising but overlong, uneven debut.”  Bass described it as “so magnificent in every conceivable aspect, and others previously unimagined, that it occurs to me that the shadow of this book … will fall over every other book I ever read.  It seems even more possible to never want to read another book.”

Nonetheless, your old family librarian wants you to know that our local bookmobile, a miniature library that provides the cream of our public library’s collections and services, is impossible to praise too highly.