“Malarky!” was one of my father’s favorite epithets for things he deemed phony or exaggerated. I heard it all the time in my youth, but not so much anymore. Dad died in the 70s, but I’m certain he’d use something stronger to describe what some obscure publishers, like BiblioBazaar, Nabu Press, or Arc Manor, are doing through online

book vendors like Amazon: issuing “new” books that are actually facsimile reproductions of much earlier works that can often be obtained from other sources for free. For example, William James, the pioneering psychologist brother of novelist Henry James, composed his “Talk to Teachers on Psychology” in 1899, but the facsimile edition published by BiblioBazaar shows only a publication date of March 23, 2007.

BiblioBazaar claims to have published nearly 300,000 titles. As a Publisher’s Weekly article asked, “Could one little company really produce so much volume?” Well, sort of. Mostly they publish single copies of old titles upon demand by scanning old out-of-copyright books. The optical scanning software used to accomplish this, and lack of editorial proofreading, often create

s numerous typos, mistaking a “j” for an “i,” for example, as many readers of e-books can attest. And even the best scanning software mis-read a few letters on each page, thereby sometimes dramatically altering meanings.

Project Gutenberg, by comparison, offers downloads of thousand of books, including “Talk to Teachers,” for free. Gutenberg’s volunteers physically scan print books out

of copyright into digital formats. These scans are then reviewed by a series of trained volunteer proofreaders multiple times to eliminate misprints caused by scanning. It’s a labor of love, and it’s gratis.

BiblioBazaar and its ilk download their own, unproofed scanned copies, bind and sell them, and make a tidy profit. Is that wrong, or simply finding a niche market? Either way, as Publisher’s Weekly said, “So much for technology ending print.” Within a few years I foresee print-on-demand machines in libraries and bookstores that download, print, and bind reliable, readable copies of books. That might have forestalled Dad from “busting a gut,” another of his favorite idioms.

The source of many of my old man’s preferred expressions, such as “For crying out loud!,” and “Oh, applesauce!” were coined or popularized in the early 1900s by sports cartoonist TAD. Before photographic reproduction became practical, newspapers relied on cartoonists like Thomas Aloysius Dorgan, better known as TAD, to make quick, eye-catching sketches of sport

ing events, disasters, and other big stories, and TAD was considered the very best.

In 1890, at age 13, TAD lost three fingers on his right hand due to a factory accident, and started drawing for physical therapy. A year later he was employed by the San Francisco Bulletin as cartoonist, and within another decade he was working for the big New York newspapers. Widely respected by his peers, TAD was considered “the greatest authority on boxing” by no less than Jack Dempsey, and his “Indoor Sports” comic strip was wildly popular, so much so that his clever word-play and new-fangled slang quickly went viral. Among many others, he introduced “hard-boiled,” “kibitzer,” ‘drugstore cowboy,” “cat’s pajamas,” and “yes, we have no bana

TAD coined neither “hot dog (which he supposed invented when he saw heated frankfurters beings sold at a chilly baseball game and could recall how to spell “dachshund”) nor “malarkey,” though many Internet sources credit him with both. According to Snopes.com, the myth-busting website, “No copy of Dorgan’s cartoon has y 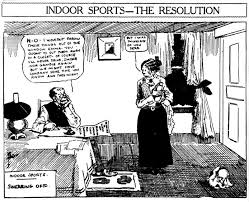 et been found, and both the practice of selling sausages in buns and the habit of calling them ‘hot dogs’ were around well before the 1900s.” But “hot dog” was used in this context in an October 1895 edition of the Yale Record.

“Malarky,” meaning “nonsense, flattery,” according to the library’s copy of Dictionary of American Slang, has oodles of unsubstantiated origins. The Etymology Online Dictionary says it’s of unknown American English origin from roughly 1924, which was just before my father’s birth. Other sources claim it comes from Ireland, being an Irish appellation for “ruffian,” or as an Irish root word for “deceiver.” “If you ever find the etymology of malarkey anywhere,” as TakeOurWordForIt.com puts it, “it wil

l likely be a bunch of malarkey.”