No one at my library school ever mentioned a number of items that would later loom large. For example, managing public restrooms should’ve been part of library school curriculum, for more time and thought goes into restroom considerations – vandalism, violence, d

o such an extent that legislators in several states are considering laws to restore the animals’ credibility” because “well-meaning federal laws designed to protect people with disabilities have instead opened the door to fraud.”

A wide assortment of creatures – monkeys, parrots, even miniature horses – are claimed as necessary for their owners’ well-being. When it comes to using the library, your rights end when your actions negatively affects other library-users or your own safety. Heating fuel-soaked Carhartts and barking dogs cross the line and make using the library problematic for others. An experimental coffee cart at Noel Wien led to pat

rons who despised coffee’s aroma to complain, and some public libraries that have pet “library cats” have been successfully sued 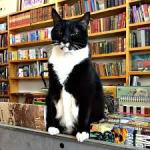 My library school experience occurred in the early 1980s, when typewriters had supplanted the legendary “library hand” penmanship, but wizened librarians still spoke of it in awe. A century earlier some New York librarians convened to consider a particularly legible and speedy penmanship style developed by Thomas Edison for telegraph operators. The librarians wanted to make various li

braries’ catalog cards appear legible and uniform so readers could know where on the cards to look for titles, authors, and call numbers. They examined hundreds of penmanship styles, agreed on standards, and debated minutiae, such as if a “square-topped three” was better than a “rounded-top three.” Rounded-tops were ultimately chosen, being less likely to be confused with fives. The resulting penmanship, “the library hand,” was clear, precise, and appreciably longer to execute than normal writing.

A recent News Miner article titled “”Cursive Sees Revival in School Instruction, described how school districts around the country are beginning to re-embrace penmanship instruction. Writing print requires different brain circuitry than keyboarding. It’s described in an Economist article last fall titled “The Comeback of Cursive”: “learning to join letters up in a continuous flow across the page improv

es a child’s ability to retain and understand concepts and inferences in a way that printing those letters (and, a fortiori, typing them on a keyboard) does not.”

I did learn some things at library school and made an “A” in History of Books and Printing where I learned about the mighty library at Pergamum. When Alexander the Great died, his empire was divvied up by his generals, with Ptolemy getting Egypt, Alexandria, and its great library, and General Attalus getting western Turke

Still, Ptolemy V grew anxious, even jailing his head librarian, Aristophanes of Byzantium, who was rumored to b entertaining a lucrative offer to run Pergamum’s library. More importantly, P

tolemy suspended exports of papyrus, the main writing medium to Pergamum. Eumenes was sheep-rich and responded with a new process for rendering sheepskin usable for scrolls. The Attalids called it charta pergamene, meaning “paper of Pergamum,” and that eventually morphed into “parchment.” Though far more durable, parchment’s harder than papyrus to roll up, so “someone thought of cutting parchment into rectangular pages and sewing them together,” thereby creating the codex, or book as we know it.

crolls, a love-struck Marc Antony made up for it by giving Cleopatra the entire Pergamum library. Of course, he never thought to help her out with restroom security.