Herodotus reported that the ancient Persians preferred getting drunk when deciding something important, and the next day, after sobering up, they’d reconsider the decision. If they were still in agreement, the

drunken decision would be adopted. When the Persians had to decide something while still sober, they’d reconsider it later after becoming inebriated. Maybe that approach should be tried by Britain’s Government Digital Service, who control that nation’s computer-based communications, and who recently announced they’d no longer use Latin abbreviations, like “etc.,” “i.e.,” and “e.g.” Their excuse is “that several programs that read webpages for those with visual impairment read ‘e.g.’ incorrectly,” translating it verbally as “egg.” 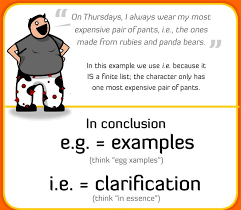 “Et cetera,” for the record, is Latin for “and the other things,” “id est” means “that is,” and “exempli gratia” means “for the sake of an example.” All of these are useful expressions, and a lifetime rolling around in the English language has engrained them to the point of second-nature in my writing, so I’m one of those who won’t be ab

andoning his i.e.’s, e.g.’s, etc. There are times when “agonizing reappraisal” is called for, as John Foster Dulles, among the chilliest of Cold Warriors, once put it, but there are also situations when leaving things alone works just fine.

For example, a recent issue of Funny Times, to which our library subscribes, featured an article by Lenore Skenazy titled “Extremely Correct and Incredibly Dumb” that castigates the tendency of some organizations in going overboard when it comes to politically correct speech. “Until recently, Skenazy wrote, “if you were a child in my city – New York – which sentence would you not see on a test … (1) ‘The witch petted her rat before ordering Eminem to boil the newts.’ (2) ‘The children ate the birthday cake before dancing with the purple dinosaur.’ Correct answer: neither. And the reason? The words. Any mention of witchcraft, vermin, rap music, or slavery was verboten on tests. But also banned was any mention of dinosaurs, birthdays, junk food, or dancing. Why? Think sensitivity. Now overthink oversensitively and you’ll start worrying that almost any words suggesting anything sad, strange, sexy, illegal, unhealthy, or even unfair could crush a child. So educators were trying to make sure no students encountere

On the other hand, those ubiquitous pictures – advertising tempting information that sit below or beside many online articles – are receiving a well-deserved re-appraisal by a host of online publishers, and have recently been dropped altogether by the NewYorker.com and Slate.com websites.

An October NYTimes.com article on the subject said, “Usually grouped together under a label like ‘Promoted Stories’ or ‘Around the Web,’ these links are often advertisements dressed up to look like stories

people might want to read. They have long provided much-needed revenue for publishers and given a wide range of advertisers a relatively affordable way to reach large and often premium audiences. But now, some publishers are wondering about the effect these so-called content ads may be having on their brands and readers … Th

e links can lead to questionable websites, run by unknown entities. Sometimes the information they present is false.”

The NYTimes, which creates all its own content, went on to cite a study done last September by the nonprofit ChangeAdvertising.org that “found that 41 of the top 50 news sites – including the Guardian.com, CNN, Time, and Forbes – embed widgets from so-called content-recommendation companies … ChangeAdvertising.org analyzed the content ads on those 41 news websites and found that 61 percent came from advertisers or other prominent publishers. But 26 percent led to ‘clickbait’ sites that were covered in more ads and lower-quality recommendation widgets featuring sexually suggestive or interruptive images.” And almost all hid their domain registration so readers couldn’t tell who was responsible. The American Association of Retired Persons was revealed as a major utilizer of these sorts of come-ons, but they, too, are reconsidering.

uide for living a decent, fruitful life during turbulent political times. He liked to quote famous thinkers to clarify his own thoughts, and in the essay I read last night, he turned to Demosthenes, who observed that “the beginning of all virtue is reflection.”

Anu, Noah, and Beverly »
« Stupidity, Waxed Tadpoles, and the Alamo