Many of us feel strongly about the newspaper’s daily comics.  Personally, I’ve cherished the inventive diversions comic strips supplied during my youth.  I’d read them all, relishing good strips like “Pogo,” and “Peanuts,” and tolerating stupid ones, like “King of Id.”  Even soap operas like “Brenda Starr” and “Mary Worth” gave inklings about the my 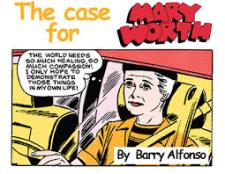 sterious world of grownups.  Sadly, newspapers grew smaller and fewer strips were published.  The soaps and adventure strips like “Steve Canyon” and “Dick Tracey” faded out, and worn-out and stupid ones proliferated.  Now I read only a dozen mainstream strips, and most of those online.  Thankfully our library has these older, and still wonderful, comics.

I think “Six Chix” is one of the worst strips ever.  The art’s crude, and the gags trite, painfully obvious, or ill-conceived.  A recent example featured two poorly rendered women burning a pile of books while commenting how it’s easier than burning e-readers.  Huh?  But even horrible clouds us

ually have silver linings.  In this instance it’s exploring what makes something funny.

There are three traditional theories of what makes something funny.  Oldest is the “superiority theory,” which, according to aScience.HowStuffWorks.com article titled “How Laughter Works,” dates back to Plato and Aristotle.  It holds that “we laugh at jokes that focus on someone else’s mistakes, stupidity, or misfortune.”  That explains slapstick but not why knock-knock jokes can be funny.  Next is the “relief theory” favored by Freud, in which “an actual story or situation creates tension within us.  As we try to cope with two sets of emotions and thoughts, we ne

ed a release, and laughter is the way of cleansing our system of the built-up tension and incongruity.”  This theory works well with dirty jokes, but not with puns.

Third is the “incongruity theory” favored by “most humor experts today” in which “humor arises when logic and familiarity are replaced by things that don’t go together … a joke becomes funny when we expect one outcome and another happens.”  However, studies have shown that “in comedy, unexpectedness is overrated.”  Moreover, many unexpected, incongruous things aren’t funny.

Now there’s the compelling “benign violation theory,” which doesn’t sound funny but is more inclusive.  University of Colorado psychology professor Peter McGraw, an expert in emotion and behavior decision theory believes that “humor occurs only when and only where three conditions are satisfied: 1). A situation is a violation, 2). The situation is benign, and 3). Both

perceptions occur simultaneously.  For example, play fighting and tickling, which produce laughter in humans and other primates, are benign violations because they are physically threatening but harmless attacks.  The theory also explains why humor fails – either because the violation involved does not seem benign, or because it’s so benign there is no violation.”

That’s why racy and racial jokes are funny to people who find those subjects benign, but reprehensible to people who don’t.  It also explains that “tickling involves violating someone’s physical space in a benign way. People can’t tickle themselves … because it isn’t a violation.  Nor will people laugh if a stranger tries to tickle them, since nothing about that is benign.”

Puns, on the other hand, violate our linguistic sensibilities while making literature much more amusing.  As Chi Luu wrote in aDaily.Jstor.org article titled “Linguistic Anarchy,” “puns can be versatile, eye-catching expressions that make us think, adding poetic colour to otherwise dull, straight-laced sayings.”  Moreover, successful puns “simultaneously juggle multiple meanings in one form within one expression.”

In her article, “What Makes a Pun Funny?,” online author Virginia Hughes cited a University of Western Ontario study that found that jokes excite far more areas of the brain than non-jokes.  In particular, the inferior frontal gyrus (IFG) “lights up more during funny puns than regular jokes, and shows more activity during funny puns

than unfunny puns … so this tiny little area, it seems, is the part of our brain that distinguishes between funny and unfunny.”

Funniness is subjective, of course, depending upon maturity, culture, and many other factors.  That’s why the subject “hum

or” brings up 1,861 titles in our public library catalog.  However, better be careful in the library; it’s slippery in the nonfriction section.

Nonplussed Emojis Not My Fault »
« Perfection, Anger, and Gratitude