People who look for them find that new, amusing, and useful words seem to pullulate.  A.Word.A.Day, that fount of fascinating terms, recently said “pullulate” means “to sprout or breed, to swarm or teem, to increase rapidly.”  Sure enough, an interesting term was soon encountered: “holophrasm.”  Words like “holophrasm” are worth rolling about one’s mind and supposing what it means, coming up with potential definitions before learning the true meaning.  It’s a red flag that OneLook.com, the authoritative dictionary database, had no definitions for “holophrasm.”  However, it cited the OxfordDictionaries.com definition of “holophrasis” as, “the

expression of a whole phrase in a single word, for example ‘howdy’ for ‘how do you do.’”

There is such a thing as over-verbal pullulation, as most serious students can attest.  Like librarians, good researchers cite in footnotes the sources of information that helped them reach their findings.  Many times those sources have long, drawn-out titles, and when the researcher has to f 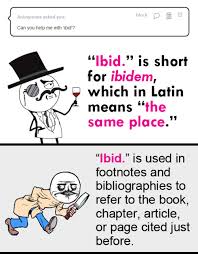 ootnote the same ones repeatedly.  It’s beneficial to all concerned to instead use “ibid,” an abbreviation of the Latin word “ibidem,” which means “in the same place.”  “Ibid,” as Maeve Maddox’s DailyWritingTips.com, another worthy word site, puts it, “usually refers to a single work cited in the note immediately preceding.”

In the ibid spirit, let’s revisit several sources of information used in this column recently.  Since de-bunking the “print-book-is-dead” myth, it’s imperative to share “The Plot Twist: E-Book Sales Slip, and Print Is Far From Dead,” a NY Times article from last week by Alexandra Alters that noted that “E-book sales fell by 10 percent in the firs

t five months of this year … The portion of people who read books primarily on e-readers fell to 32 percent in the first quarter of 2015, from 60 percent in 2012, a Nielsen survey showed.”  A few years ago there was talk about the rising popularity of e-books bringing about the demise of print books, but that ignored important factors.  For instance, it’s harder to physically read and recall what’s been read on a scrolling screen..

uestion-and-answer format.  “Of Mercy,” for example, begins, “Q. What is mercy?  A. It is tenderness of the heart.  Q. What are the advantages of this virtue?  A. The exercise of it tends to diffuse happiness and lessen the evils of life.”

“Of Generosity” begins “Q. What is generosity?  A. It is the act of kindness performed for another which strict justice does not demand.”  That resonated after reading the international legal definition of migrants versus refugees.  A “migrant,” according to Maddox, “chooses to leave home, but a refugee is forced to seek a place of safety elsewhere.”  Moreover, “[a]s defined by international law, a ‘refugee’ is a person who has fled a country to escape war or persecution and can prove it.”  Without ironclad proof, or if you’re fleeing things like poverty or natural disasters, there’s no legal sanctuary.

It’s awful to have no home.  During the breakup of Czechoslovakia, Turks living there were told “Cekoslovakyalilastiramadiklarimizdanmissiniz,” which means “you are reportedly one of those that we could not make Czechoslovakian.”  They had to leave and become illegal refugees.

People in at least one refugee camp will find solace at a library, though.  The tent city outside Calais, France known as “the Jungle” is “a temporary home for several thousand people, most of whom have fled East Africa or the Middle East.”  The camp is near the “Chunnel,” the tunnel between France and Britain, where many of the refugees hope to go.  A September NY Times article by Pamela Druckerman described a British volunteer named Mary Jones who has established “a makeshift library … made out of wooden planks and plastic sheeting with a corrugated meal roof” called “Jungle Books.”

Jungle Books has few resources and contains only a few hundred cast-off books, but Druckerman noted “that the library is mostly just a calm place for people to digest what’s happened, and mull what to do next.”  Having a

generous, merciful place to safely be and consider is a mission worthy of any library.