“I was an accomplice in my own frustration,” the English playwright and screenwriter Peter Shaffer once wrote, and to some degree we all occasionally allow life’s minor aggravations to rise to the level of frustration. Bad weather, squirrels, political ads: in the final analysis there are many things worthier of our frustration,

but that’s easier said than done.

A fellow Osher Lifelong Learning Institute student recently mentioned her frustration with people using “anxious” when they mean “eager.” “Anxious,” dates from the 1620s, like “anxiety,”

stems from the Latin “anxius: uneasy, troubled in mind.” “Eager,” according to the American Heritage Dictionary, means “having or showing keen interest, intense desire, or impatient expectancy.” You’re anxious about something, but eager to do or be something. However, “anxious” is increasingly being used in place of eager.

I for one am anxious about the eagerness of some misguided modernists to re-write Shakespeare in modern English. The NY Times has reported that “The Oregon Shakespeare Festival has decided that Shakespeare’s language is too difficult

for today’s audiences to understand.” Their solution is to hire thirty-six playwrights “to translate all of Shakespeare’s plays into modern English.” This is akin to hiring hip-hop artists to rewrite Mozart. It’s the sounds, interplay, and nuance of Mozart’s notes and Shakespeare’s words that make them special, and what are the odds that any of the thirty-six playwrights will produce anything comparable to the Bard’s flow of expression?

Times writer James Shapiro predicts that “this experiment is likely to be a waste of money and talent, for it misdiagnoses the reason that Shakespeare’s plays can be hard for playgoers to follow. The problem is not the often knotty language; it’s that even the best directors and actors – British as well as American – too frequently offer up Shakespeare’s plays without themselves having a firm enough grasp of what his words mean … Claims that Shakespeare’s language is unintelligible go back to his own day. His great rival, Ben Jonson, reportedly complained about ‘some great bombast speeches of Macbeth which are not to be

understood.’ Jonson failed to see that Macbeth’s dense soliloquies were intentionally difficult; Shakespeare was capturing a feverish mind at work, tracing the turbulent arc of a character’s moral crisis. Even if audiences strain to understand exactly what Macbeth says, they grasp what Macbeth feels.”

Participants in the annual Bard-a-thon are grateful Fairbanks Shakespeare Theatre keeps a healthy stock of the Riverside Edition of Shakespeare, the quintessential single-volume collection of all Shakespeare’s plays and poetry. The Riverside is rife with footnotes explaining the unfamiliar words and descriptions of the contexts tha

t help clarify things, and, like so much in life, understanding’s a big part of the fun. But for some, that sort of thinking is frustrating.

“Don’t give me that guff!” was one of my father’s favorite exclamations of frustration. I suspect Dad didn’t know exactly what “guff” means, but there was no uncertainty about his emotional state. “Guff,” according to

Evan Morris’s Word.Detective.com, “is the polar opposite of a straight answer … a lie so transparent that the liar knows you know he’s lying, but he says it anyway.” Coined in the early 1800s, “guff” originally meant “a puff or gust of wind, or an unpleasant smell.” Using “guff” to mean “nonsense” came about in the 1880s, when speakers’ orations were compared to “gusts of empty air.”

A decade ago there were some elected officials who thought that the rise of the personal computer meant that public libraries were becoming obsolete. That proved to be the gustiest of guffs, but some still can’t understand why their taxes should go for schoo 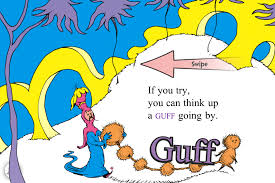 ls and libraries if they choose not to use those services. Like weak Shakespearean actors, they don’t have a decent understanding of the facts and fail to grasp the larger picture. Good schools and libraries provide an informed and capab

le workforce, an attractive place for families and businesses to locate, and a healthier community in every respect.

Our community’s a fine place overall, and that’s worth celebrating. And as author and TED speaker Srikumar Rao pointed out, “Whenever you’re feeling grateful, you are not feeling frustrated and angry … that’s a big benefit in and of itself.”