When grammar rules arise, I reflect upon Federal Judge William Wayne Justice, a forward-thinking, progressive jurist who from the early 1940s consistently ruled in favor of civil rights. But he presided in East Texas, whic 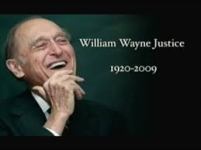 h generally trended in the other direction. He was nonetheless widely respected within legal circles, his legacy being such that in 2004 the University of Texas Law School, his alma mater, established the William Wayne Justice Center for Public Interest Law.

My father-in-law practiced law in Tyler, Texas for a half-century, supported Justice’s rulings on civil rights, but generally thought him too liberal. Our registered Weimeraner was officially named Wilkomen, but my father-in-law insisted on calling him Willy Wayne as a gentle poke at the judge’s ancestry. However, my father-in-law’s disgust with our grammar was in dead earnest when we instructed Willy to “l

ay down,” since “lie down” is correct. “Lay,” as in “put something or someone down carefully,” dates to the late 800s CE, while “lie,” as in “to recline,” is from around 1010, and we’ve apparently been getting them mixed up ever since. According to DailyWritingTips.com’s Maeve Maddox, “The most usual error is to use ‘lay’ intransitively,” as in “lay down, Willy! “[B]ut some poor con

scientious souls, aware that ‘lay’ is often the wrong choice, are falling into the error of using ‘lie’ transitively,” as in “Lie Willy on the bed.”

Maddox says “I’ve become partially inured to the intransitive use of ‘lay’ … The alarm clangs only when I observe its use by teachers, broadcast journalists, advertisers, doctors, lawyers, and anyone else whose occupation requires the use of English for public communication.” All well and good, but what about last month’s article on JSTOR/Daily, (“where news meets its scholarly match”), titled, “Dear Pedants: Your Fave Grammar Rule Is Probably Fake”?

First of all, a “pedant” is not jewelry. It’s “a person who gives too much importance to details and formal rules, especially of grammar,” according to Macmillan Dictionary. For example, the

forbidden splitting of infinitives and ending sentences with prepositions, like most of their ilk, originated in the Victorian era and “were entirely dreamt up in an age of moral prescriptivism, reflecting nothing of historical or literary usage,” but were intended “to encourage the poor English language to be more like an entirely different (and entirely dead) language, namely Latin … The English language didn’t change to make those rules obsolete; they were simply fictional from the start.”

When it comes to splitting infinitives, most everyone’s done it before and after the Victorian crypto-Latin rule-makers unilaterally laid down their laws, because our language’s nuances require that sort of flexibility. As the article notes, the phrase “You really have to watch him” hasn’t the same connotations as “You have to really watch him.”

That brings us to “yahoos.” The American Heritage Dictionary defines “yahoo” as “a rude, noisy, or violent person.” It’s from Jonathan Swift’s “Gulliver’s Travels,” in which Gulliver meets Yahoos while traveling to various fanciful lands. Since its 1726 publication, scholars have debated the hidden meanings of the mysterious words Swift attributed to the languages of the tiny Lilliputians,

the giant Bobdingnags, and the Houyhnhnm, the intelligent horses “tended by deformed savages known as Yahoos.” According to TheGuardian.com, University of Houston professor Irving Rothman has broken Swift’s code, tracing many of the words back to the opposite meanings of Hebrew terms. “Yahoo,” Rothman proposes, was a play on YHWH, the Hebrew word for god, which is pronounced “Yahway.” Swift’s point was that the Yahoos were the natural opposite of everything divine, but the creators of the Yahoo search engine in 1994 ignored him.

Ignoring things is a human trait. For example, most of us insist on calling the onset of night time “sunset,” when the Earth’s doing the moving, not the sun. But ignoring grammar rules is sometimes okay. I just starte 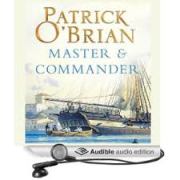 d re-reading my favorite author, Patrick O’Brian while listening to the audio version from the public library. In “Master and Commander,” an officer gives dictation lessons to young midshipmen: “Take those pens and these sheets of paper, and to pass him yonder book, which would answer admirably for them to be read to out of from.” That’s fun writing; no lie.