Fishing in Alaska with Outside college buddies can be challenging for librarians, whom many people believe contain all knowledge when they’re actually trained to know where desired information’s likely to be found. So when my pals

asked about the Wrangell Mountains’ namesake, I immediately turned to Orth’s “Dictionary of Alaska Placenames,” a prime Alaskana reference book.   There I learned about Admiral Ferdinand Friedrich Georg Ludwig von Wrangel, beginning with Wikipedia’s assertion that “In English texts, ‘Wrangel’ is sometimes spelled Vrangel, a transliteration from Russian, which more closely represents its pronunciation in German, or ‘Wrangell.’”

Wrangell was a Baltic German and an explorer for the Russian government. He governed the Russian Alaska settle 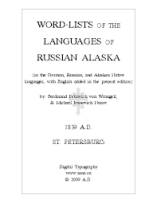 ments from 1829-1834, which included his accomplishments of introducing potatoes for cultivation and the encouraging the mining and fur trades. But the achievement that caught my bibliographic eye was his “Word-Lists of the Languages of Russian Alaska.” Originally an 1839 compilation comparing German, Russian,a nd Yup’ik expressions, English terms were added to the 2009 online version. Now you can read comparisons like “Comet, Komet, Kometa, and Azbrxhaxmakb” at http://www.asna.ca/alaska/research/slovar.pdf

A good wordlist is joyful to behold, and they’re legion on the Internet, and they’re usually absurdly subjective. Take “100 Beautiful Words From the English Language You Need to Use More” from SoBadSoGood.com. I’ll concede words on the list like “imbroglio (an altercation or complicated situation),” and “desuetude (disuse).” And I noted that “susurrous (whispering),” a particularly favored word of my eldest daughter, made the cut. But how did “brood,” “elixer,” and “Susquehanna” made that list and not “library,” “books,” or “reading”?

I’d argue that “venery” should be included. Besides flowing from the tongue, venery includes some interesting connotations. WorldWideWords.com says there are tw

o distinct meanings of the term, “the practice or pursuit of sexual pleasure,” and “hunting, the sports of the chase.” The first goes back to Venus, the Roman goddess of love. The second comes from Latin, too, but in this instance it’s “‘venerie’: to hunt.” “Venery refers to hunting game animals such as wild boar, hares, wolves, bears, and especially deer. A close relative to ‘venery’ is ‘venison,’ nowadays always meat from a deer but in earlier times the flesh of any hunted animal … The beasts of venery were those that were considered most noble to hunt. There were animals of lower order, too, the beasts of the chase, which included the fox, as well as beasts of the warren, such as the rabbit and the pheasant.” 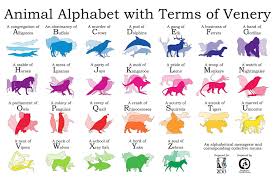 er of crows,” but even stranger ones exist. There’s a “gaze of raccoons,” an “intrusion of cockroaches,” and a “hover of trout.”

Benjamin Franklin wrote about it in his “Autobiography”: “Rarely use venery but for health or offspring, never to dullness, weakness, or the injury of your own or another’s peace or reputation.” That could apply to lechery or hunting in our often confusing language. Naturally, there’s a “Top 10 Confused Words in English” list from Maeve Maddox’s DailyWritingTips.com, including “illicit (‘not allowed by law or social conventions)” and “elicit ( ‘to draw out a reply or reaction’), and “imply (‘to suggest indirectly’),” and “infer (‘to draw a conclusion’).” My old nemesis “it’s/its” is there, too. “Despite the hundreds, perhaps thousands of explanations to be found on the Web regarding the difference between these two spellings,” Maeve wrote, “the mistake of writing ‘it’s’ for ‘its’ remains the most common written error of them all.”

Rude word lists abound, too, including Samuel Johnson admitted into his iconic 1755 “Dictionary of the English Language.” Described by the British National Library as “one of the most famous dictionaries in history,” it was an enormous individual accomplishm

ent. With only a few assistants’ clerical help, Johnson single-handedly defined 40,000 words in detail and demonstrated them in 140,000 quotations from literature. Among the few milder “barbarianisms” Johnson excluded most words allowed are “bum,” and “fart.” 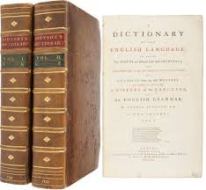 ontaining gems like “pricklouse (a word of contempt for a tailor),” and “fopdoodle (a fool).” And one for aspiring venelists to fear: “amatorculist (a little insignificant lover).”