One’s personal collection of books, or lack thereof, is often interesting, hence my curiosity about other people’s libraries.  Perhaps a lifetime of tea drinking in libraries contributed to this condition.  Coffee’s never interested me, but I do consume healthy quantities of black tea, for, as C.S. Le

wis put it, “You can never get a cup of tea large enough or a book long enough to suit me,” so it’s comforting to find scientific proof of what’s behind my brilliance.

“Regular tea drinkers have better organized brain regions – something associated with healthy cognitive function,” according to the World Economic Forum.

They cite a University of Singapore study that “showed that daily consumption of tea can reduce the risk of cognitive decline in older persons by 50% … long-term benefits are due to the bioactive compounds in the leaves … these compounds exhibit anti-inflammatory and antioxidant potential and other bioactive properties that may protect the brain from vascular damage and neurodegeneration.”  Meanwhile, your morning cup of coffee “requires 140 liters of water to grow, process, and transport enough beans for a single cup, according to UN Foot and Agriculture Organization figures.”

Those cups of library tea left their mark, and I can’t resist checking out the libraries of favorit

e authors.  Once my wife and I toured Michele Monta

igne’s library atop his estate tower outside Bordeaux, and while his books are long gone, his favorite classical quotations remain on the ceiling beams.  Cambridge University Library owns the only ten survivors from Montaigne’s library, each with the author’s scribbled marginalia.  None of Shakespeare’s books have been unearthed.  However, scholars have

pon since he “wrote plays according to a method that has been labeled plagiaristic; ‘appropriative’ is a more polite term, and historically more accurate,” according to Stuart Kell’s  “Looking for Shakespeare’s Library,” a Lapham’s Quarterly article.

“Shakespeare, the Lodger,” a book I own, describes his early days.  It tells how Shakespeare had a buddy from Avon named Richard Field, who was apprenticed to a prominent London printer who died a couple of months after Field completed his apprenticeship, whereupon he married his former boss’ widow.  This was a lucky break for Shakespea

re since printers were also booksellers, and he borrowed scads of top-flight books from Field’s shop, such as Spanish and Italian language books and John Florio’s famous translation of Montaigne’s Essays, which he drew upon repeatedly.

Naturally, I was intrigued by “How to Read Like Mark Twain,” a Smithsonian.com article by Terena Bell, that quotes one of Twain’s more abject lies: “I have no liking for novels or stories.”  He was, in fact, “a voracious reader,” and Bell’s story cites some of Twain’s favorites, including “Robin Hood and His Merry Foresters” by Joseph Cundall (that strongly influenced “Tom Sawyer”), Milton’s “Paradise Lost” (Twain owned multiple copies and re-wrote versions of it), and “most of Charles Dicken

s” (“ young Twain knew some Dickens novels by heart”).  The “Twain family owned more than 3,000 books, and the humorist is known to have read nearly 5,000 literary works,” according to Auburn University professor Alan Gribben who in May will publish a 3-volume work of literary criticism outlining “the reading that influenced Twain, from Shakespeare to Poe.”  It’s fascinating how Twain drew upon Shakespeare who drew upon Montaigne who drew upon the Greeks and Romans, each spinning off disparate literary classics.

In 1887 Twain sent a list of reading recommendations in response to a request from a Maine minister.  For boys and girls he suggested “Macaulay, Plutarch, Grant’s Memoirs, Crusoe (for boys), Arabian Nights, Gul 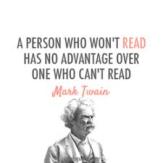 liver, and Tennyson (for girls).”  For grownups it was “Shakspeare (sic), Browning and Carlyle (French Revolution only), Malory’s King Arthur, Parkman’s histories (a hundred of them if there were so many), Arabian Nights, Johnson (Boswell’s, because I like to see that old gasometer listen to himself talk).”  Reading tastes have changed, but my pantry’s well-stocked with Nilgiri tea from India’s Blue Mountains, and my bookshelves are burgeoning, so I echo Dostoevsky, who said “let the world go to hell, b

ut I should always have my tea.”