Here are three art-related questions for you involving music, sculpture, and painting: are smells and paint-by-number paintings really art, and what is the “doodah” in the Stephen Foster tune, “Camptown Races”?  The first query sprang from reading a recent Pickles comic strip where the wife asks the husband, “Did you know that the makers of Play-Doh have trademarked the smell?” “Really?, the husband

replies. “Yes, it has a sweet, slightly musky, vanilla fragrance with overtones of cherry.”  “Ptoo!!,” he says, adding “they’re sure not going to trademark the taste!”

It’s been many moons since I last smelt Play-doh but would  recognize it instantly. But can you trademark an aroma? As of last May Play-doh’s musky-cherry smell is patented by the U.S. Patent and Trademark Office, like they trademarked strawberry-scented toothbrushes and pina colada ukuleles since they serve a “utilitarian purpose.”  For example, Manhattan Oil differentiates their auto and boat lubricants with che

rry and grape odors, and strawberry, and for the product’s 50th anniversary a Play-Doh fragrance debuted just before Mother’s Day in 2006.

m wallpaper.  His nephew joined Kutol soon afterward and promoted the product for school arts and crafts. The Mc

Vickers established the Rainbow Crafts Company to market Play-Doh in 1956, advertised it on Captain Kangaroo, and in less than a year sales exceeded $43 million.

In our age of heightened political correctness, some American folk music is considered so charged with racial incorrectness that it overrides its musical value.  For instance, in 1850 Foster composed “Gwine to Run All Night, or De Camptown Races,” in African-American dialect, after attending sc

hool five miles from Camptown Pennsylvania and its racetrack, ten years earlier.  He wrote it for the minstrel shows that featured white performers in blackface makeup and African-American minstrel groups, who utilized songs and jokes that were typically racially disparaging.

Today that’s a toxic combination, but even in 1852 residents of Camptown, New Jersey felt compelled to change the name of their township to Irvington, due to the song’s “bawdiness.”  Is it wrong to sing the undeniably jaunty tune today? The curator of the Americana Collection at

the New York Public Library, librarian Richard Jackson, wrote that Foster’s “dialect verses have all the wild exaggeration and rough charm of folk tales as well as some of his most vivid imagery … Together with “Oh! Susanna’, ‘Camptown Races’ is one of the gems of the minstrel era.” But what’s a doodah?  According to the Online Etymology Dictionary its “an excitement.”

“Doodah” in the excitement sense first appeared in print in 1900, took off in the 1920s, peaked again in the 1960s, and continues to grow in general usage.  I learned this from Google’s N-Gram Viewer, “an online search engine that charts the frequencies of any set of comma-delimited search strings using … sources printed b 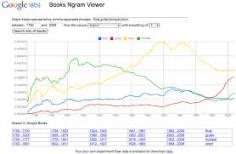 The “paint-by-number” N-Gram showed the phrase first appeared around 1950 and climbed steeply from 1970 until the 1980s, when it skyrocketed.  So “paint-by-number” is a far more popular than “Play-Doh,” but is it art? It’s creator, Dan Robbins, didn’t think so. Robbins died recently, but his obituary was buried in the back of the paper.  Among the many benefits of paint-by-number cited by the manufacturer are increased self-confiden

ce, improved motor skills, and as therapy for people with muscle tremors. “Robbins,” the obituary said, “was modest about his work and didn’t get too bothered by those who mocked the paintings.”  He got the idea of using to numbers to indicate the paint to use from Leonardo da Vinci, who utilized the technique for his assistants and students, so Robbins was in good company and credited his Renaissance source.

But is it art?  Robbins wrote that “I never claim that painting by number is art.  But it is the experience of art, and it brings that experience to the individual who would normally not pick up a brush, not dip it in paint.

That’s what it does.” Sounds like art to me; at least I picked up a little through osmosis after working several decades in Noel Wien Library.  It’s packed with fine paintings, sculptures, drawing, quiltings, and much more, not to mention the hundreds of thousands of books, each an artwork unto itself.

When Outside guests visit this summer, give them a treat by visiting the library and take the self-guided art tour.  As Einstein said, “the most beautiful thing we can experience is the mysterious. It is the source of all true and and science.”  And art, science, and mystery all abound a