Reading history often provides useful insights into why people behave as they do, and, while it’s left me wondering about the distinction between demagoguery and propaganda, I think I’ve parsed it out. My li

ttle Random House Dictionary says a demagogue is “a political leader who gains power by arousing people’s emotions and prejudices,” while propaganda is “information or ideas methodically spread to promote or injure a cause, nation, etc.; the deliberate spreading of such information or ideas.” In othe 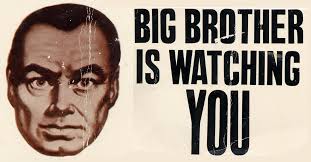 A recent cartoon in this paper featured a reporter listening to a political speech and saying “Senator Belfry is the most promising of the 2020 candidates – today alone he’s made over 60 promises.” Now some promises are purely propaganda, li

ke those currently emanating from our state and national capitals, and there are sincere promises that the promiser means and fulfills, like Osher Lifelong Learning’s promise to provide inexpensive intellectually rewarding and stimulating classes for seniors. Out of 135 possibilities I’m taking courses ranging from linguistics to film studies to “cheese 101,” and I’m teaching a class on Rex Stout, author of the delightful Nero Wolfe mysteries.

Stout, the most published U.S. author at his death in 1975, rated a large N

YTimes obituary that included a quote from a New Yorker profile wherein he was “likened to Ajeeb, a robot of the 1890’s that appeared to beat all comers at chess.” Ajeeb was a life-sized automaton, or robot, dressed in Ottoman fashion, seated at a large cabinet. “He was thrown open from time to time so that the public could peer in his interior. But in spite of every appearance of being an honest, clean-living machine, Ajeeb had a guilty secret. He had a little man concealed about his clockwork person, the Great Pillsbury, one of the chess masters of the period.” The review said that Nero Wolfe, Stout’s fascinating 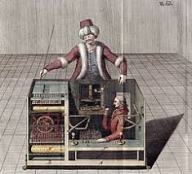 fictional creation, “was alike Ajeeb because Mr. Stout was about his all time

… Nero is odd and a trifle grotesque because he has all the foibles and peculiarities of the man inside him. The fat detective can’t help being a knowing and versatile operator since he gets his stuff from the variegated experience of the author.”

status. A busy guy, Kempelen was a gifted artist, etcher, poet and musician, and he invented steam engines, waterpumps, pontoon bridges, steam turbines, a speaking machine, and a typewriter for the blind. However, his crowning achievement was the bogus chess-playing robot that he named “The Turk” whose name evolved for 84 years as it beguiled experts like Napoleon and Benjamin Franklin.

Von Kempelen was certainly a scoundrel, but not a demagogue. Loren Sammons, Classical Studies professor at Boston University, wrote that “Demagogues have been a problem for democracy for 25 centuries, at least since the populist Cleon persuaded his fellow Athenians to slaughter every man in the city of Mytilene as punishment for a failed revolt.” Cleon also convinced the voters to support selling all

the city’s women and children into slavery and to slaughter all the prisoners of war that had been brought back to Athens. They did the latter in a frenzy right away, but the next day reconsidered their vote. The great Aristotle considered Cleon horrible as did Cleon’s contemporary Thucydides, whose chronicled Cleon’s many other calculated lies to gain temporary political influence.

Our public library abounds with scads of historical lessons from which we seldom seem to profit. And it promises reliable, free, and unbiased information, for as Hamza Yusuf noted, “Where you don’t have people who have strong intelle

ctual capacity, you get demagoguery.”

Jackrabbits, Pecans, and Colophons »
« Righting Wrongs, Writing Wrong, and the Power of Mistakes