Being a librarian isn’t as straightforward as you’d think. The Oxford English Dictionary (OED), the mother of all dictionaries, defines “librarian” as “concerned with books … a bookseller or scribe.” That’s why describing myself as a “rogue librarian” on my calling cards caused consternation in France, where the phrase translated as “naughty bookseller.” The confusion can be traced to the Romans, whose word for “book”, “liber,” is “believed to be a use of ‘liber’ bark, the bark of trees, according to Roman tradition, being used in early times as a writing m

aterial.” Consequently, bookstores in Italy are “libraria,” in Spain “libreria,” and in France “librarie,” and in Romance-speaking lands, our “libraries” are called “bibliothecas” and “bibliotheques.”

The OED also lists related terms, such as “librarianess: a female librarian,” “librarier: a bookseller,” as in someone supplying books to libraries, and “librarious: pertaining to, or having to do with books.” But none of them provide a category for a naughty librarian like Casanova. True, the librarian profession has had its share of unusual persona

lities, like all other callings. Elvis, Golda Meir, and Lewis Carroll all worked in libraries, for example. John Beckley was the country’s first political campaign manager and later its first Librarian of the U.S. Congress from 1802-07, J. Edgar Hoover worked at the Library of Congress while attending night school, and Mao Zedong worked as an assistant librarian at Peking University under a Marxist director who converted him to communism.

Giacomo Casanova cut an equally wide swath in 18th century Europe. Fortunes won and lost, imprisonments and escapes, wild money-making schemes, and amour, of course, all played big parts in his active life, but Casanova’s intellectual comfort zone was in libraries. Laurence Bergreen’s “Casanova: The World of a Seductive Genius,” a new book I borrowed from our library, provides evidence of the great lover’s bibliographic inclinations. Early encounters with Rome’s libraries were bolstered by sojourn 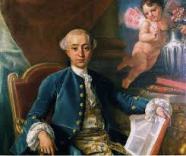 s in monastic libraries, as in his visit to Eisiedeln Abbey’s ancient library in Switzerland, where, “[e]xperiencing a reawakening of his scholarly impulses, he could have happily remained amid these massive volumes, free from the turmoil of the libertine’s life.”

f Wolfenbuttel in lower Saxony, ‘for it is there that the third-finest library in Europe exists.’” This was the Herzog-August Bibliothek, where he spent his waking hours reading. “I lived in the most perfect peace, never thinking of the past or future, my work preventing me from knowing that the present existed.” In his later years Casanova

brarian by the wealthy, prominent Count von Waldstein, “a highly desirable assignment … It was here that he oversaw an archive of forty thousand volumes, and devoted his time to literary endeavors.”

Though hard to fathom, another librarian, Dr. John Dee, lived an even more active life. “Dee built, and lost, perhaps the greatest private libraries of 16th century Europe. He claimed to own over 3,000 books and 1,000 manuscripts,” according to the Royal College of Physicians article on him. He was “one of Tudor England’s most extraordinary and enigmatic figures – a Renaissance polymath, with interests in almost all br

anches of learning. He served Elizabeth I at court, advised navigators on trade routes to the ‘New World’, travelled throughout Europe and studied ancient history, astronomy, cryptography and mathematics. He is also known for his passion for mystical subjects, including astrology, alchemy and the world of angels.”

The oldest book in Noel Wien Library is the 1659 bestseller, “A True & Faithful Relation of What Passed for Many Years Between Dr. John Dee (a Mathematician of Great Fame in Queen Elizabeth and King James Their Reigns) and Some Spirits

.” Dee’s book is one of 70,000 rare and wonderful books that were given to our library via the Fairbanks Library Foundation by former Hunter School librarian Barbara Gorman and late husband Dan. Fine books lose 90% of their monetary value when stamped

by libraries, and because old books can’t survive bookdrops at forty below, most were sold with the proceeds going to the Foundation to improve our library in myriad ways.

It was an incredible gift, and worth noting this holiday season. Like our library, it’s a gift that keeps on giving,