Sherman, Grant, and the Library of America

and self-assured, Sherman brilliant, volatile and self-critical … they quickly learned they could count on one another and forged an unshakable personal and professional bond. ‘You are now Washington’s legitimate successor,’ Sherman told Grant in March 1864, ‘and . . . if you can continue as heretofore to be yourself, simple, honest, and unpretending, you will enjoy through life the respect and love of friends, and the homage of millions of human being

s . . . for securing to them and their descendants a government of law and stability.’ Grant praised Sherman similarly in January 1865, remarking on ‘how noble a man he is’ and adding: ‘I am glad to say that I appreciated Sherman from the first feeling him to be what he has proven to the world he is.’

Those interested in history owe it to themselves to read the memoirs of both men. Grant’s is widely considered to be among the best, if not the best, presidential writing, ever. I was fortunate to encounter the Library of America (LoA) edition of Grant’s book at the Corsicana Public Library in Te

xas. Since then I’ve acquired my own copy, for it’s worth re-reading and makes a fine addition to anyone’s personal library. Grant wrote it at the urging of Mark Twain, who arranged publishing of the memoirs. Grant composed them almo 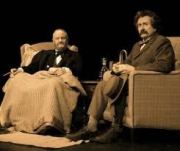 st single-handed despite terrible pain from throat cancer that led to his death five days after completing the book. It was a huge hit, being sold door-to-door by unemployed Civil War veterans wearing their old uniforms who used a sales pitch penned by Twain. The profits staved off bankruptcy for Grant’s family.

It’s an enjoyable read. “Free of the romantic gloss that encumbers many Civil War reminiscences,” the Times reviewer wrote, “the narrative marches forward in economical prose that occasionally achieves true distinction. The work also enjoys a reputation for honesty and fairness. But in fact Grant ignored the controversy over his alleged drinking problem.” Indeed, even during the war ambitious backstabbers assailed Grant’s sobriety and Sherman’s sanity. No one’s perfect, but as Sherman wrote in response to critics, “Grant stood by me when I was crazy, and I stood by him when he was drunk, and now we stand by each other.”

LoA provides the most authoritative editions of the best American writers’ works. This one appends Grant’s

anguished notes and letters to the doctor who attended him that are beyond poignant. Besides being the cat’s meow in authoritativeness, LoA hardback books are always incredibly well made, beautifully bound, and printed on acid-free paper that won’t yellow for 500 years and is very thin, yet doesn’t allow the print on the other side to bleed through. So the 1,200-page “Personal Memoirs of U.S. Grant” fits easily into a single, lightweight volume.

ican authors’ complete works to small public libraries across the land, including Corsicana. Reading Grant led me to Sherman, whose forthright recollections were controversial in his day, and revealing in ours. He was very found of the South, for example, and slavery didn’t bother him. But his famous “March to the Sea” broke the back of the Confederacy and garnered an enduring enmity from Southerners.

Today “Shermanesque” means “brutally thorough, especially in defeating someone.” A note in the excellent A.Word.A.Day online site said Sherman “didn’t mince words. When he was being considered as a presidential candidate, he said, ‘I will not accept if nominated and will not serve if elected.’ Since then, a categorical statement, especially a denial, is called Shermanesque.” I’ll be Shermanesque in asserting that there are no better editions of America’s best writers than those published, with the support of the National Endowment for the Humanities and the Ford Foundation, and that they make wonderful presents for loved ones.

Yes, I’m looking beyond the elections to the holidays. As Sherman also said, “If forced to choose between the penitentiary and the White House for four years, I would say the penitentiary, thank you.”