Constructive criticism can be helpful, or hurtful, depending on how and when it’s delivered if delivered. For example, Donna Haraway’s 1991 book titled “Primate Visions” was reviewed r

ather harshly by anthropologist Matt Cartmill in the International Journal of Primatology. “This is a book that systematically distorts and selects historical evidence,” Cartmill opined, “but that is not a criticism, because its author thinks that all interpretations are biased, and she regards it as her duty to pick and choose her facts to favor her own brand of politics … This is a book that clatters around in

a dark closet of irrelevancies for 450 pages before it bumps accidentally into its index and stops.”

There are more constructive ways to say things like that. That’s the focus of “Is This the Right Moment?,” a recent online article by Anne Curzan about correcting others’ grammatical errors. “Correcting someone’s language can feel like criticism even when it’s not meant that way … we should realize that doing so can be loaded.” Curzan recommends first cons 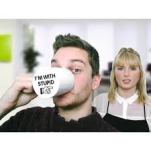 idering, “Will this person really benefit from having you call out this bit of language?,” and “is this a good moment? If so, then go ahead – and do it kindly. If not, if the speech will make you feel smart but not really help the other person, then consider keeping the correction in your head.”

Bruised feelings can be exacerbated when one’s supposed errors stem from the upwelling of unusual grammar arising from social media rather than forgetting what Mrs. Strickland taught us in 5th grade English. Some of us are more adept at Mrs. Stri

ckland’s rules than Twitter’s, and don’t appreciate having beliefs like “periods are passé” foisted upon us. Last month the NYTimes ran “Period. Full Stop. Point. Whatever it’s Called, It’s Going Out of Style,” an article by Dan Bilefsky that maintained that the 140-character limit imposed on tweets is causing a general decline in the use of punctuation. It quotes David Crystal, a British author of “more than 100 books

on language,” who asked “In an instant message, it is pretty obvious a sentence has come to an end … so why use it?”

In social media, Crystal said, “the period is being deployed as a weapon to show irony, syntactic snark, insincerity, even aggression.” Nowadays, after making an elaborate meal and then being stood up, for instance, “you are best advised to include a period when you respond “Fine.” to show annoyance. “Fine” or “Fine!,” in

contrast, could denote acquiescence or blithe acceptance. The period now has an emotional charge and has become an emoticon of sorts.”

This reasoning smacks of the same smug self-assurance of the 1990s futurists who foretold the eminent death of print books and libraries, since soon everyone would own an inexpensive computer and through it have

access to every scrap of information known to mankind. Today more print books are being published than ever before, and society’s need for the root functions of libraries – collecting information, organizing it and getting it to users – remains unchanged, just as it has for the last 5,000 years.

I predict that periods will continue to be utilized, because they facilitate readers’ comprehension, like spaces in between words, paragraphs, standardized spelling, and common sense grammar. Nonetheless, I abhor grammatical persnicketiness, because sometimes good communications requires bending those rules. And I admire the great noir writer Raymond Chandler’s letter, gently delivered in poem form, to his publisher’s overbearing proofreader, one Margaret Mutch, who disapproved of Chandler’s penchant for splitting infinitives.

His lengthy letter includes, “A lot of my style (so-called) is vile For I learned to write in a bar. The marriage of thought to words was wrought With many a strong sidecar. A lot of my stuff is extremely rough, For I had no maiden aunts. O dear Miss Mutch, leave go your clutch On Noah Webster’s pants! The grammaria

n will, when the poet lies still, Instruct him in how to sing. The rules are clean: they are right, I ween, But where do they make the thing? … O leave us dance on the dead romance Of the small but clear footnote. The infinitive with my fresh-honed shiv I will split from heel to throat.”