It’s no secret that I’m still not over last year’s passing of my sweet old dog, Fay. When I soon thereafter ran across a NY Times article titled, “The Big Search to Find Out Where Dogs Came From,” I read it with unusual interest. “Before humans milked cows, herded goats or raised hogs, before they invented agriculture, or written language, before they had permanent homes, and most certainly before they had cats, they had dogs. Or dogs had them,” author James Gorman wrote. Scientists and dog fanciers have long debated how dogs and people got together, and “a large new study being 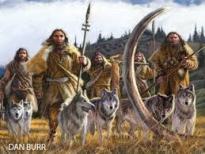 run out of Oxford University … may soon provide some answers.”

Some studies have proven that dogs first became man’s partner in Asia, while others proved it happened closer to Africa. Who’s right? A recent News Miner article, by AP writer Malcolm Ritter, said “The long-debated question of where dogs first appeared has always been complex, and now a new study suggests it may have two answers. According to the new Oxford study, “Dogs arose from wolves in Asia and from a different wolf population in Europe or the Near East. The Asian dogs traveled west along with humans. They arrived on the turf of the other dogs between 6,000 and 14,000 years ago and partially replaced them or interbred with them, establishing a new population that is genetically difference from Asian dogs. Many dogs today show some genetic heritage from both the eastern and western groups of dogs.”

Some dogs absolutely love to pull sleds; moreover, “Sled Dogs Have Been Pulling Us For Millennia,” according to a NationalGeographic.com article by Kristin Romey. She cites, Robert Losey, a Canadian archeologist specializing in human-animal relationships, who found 8,000-year-old graves of Siberian sled-dogs who resembled modern Siberian Huskies. “These were incredibly strong animals,” he said, “they look like a cross between a human weight-lifter and a long distance runner.” And anyone familiar with sled dogs know they are wired to run and pull.

Baby songbirds apparently hatch wired to receive baby talk. According to McGill University study’s author, “Songbirds first listen to and memorize the sound of adult songs and then undergo a period of vocal practice – in essence, babbling – to master the production of song.” What’s more, “just as people speak more slowly and repeat words more often when speaking to infants, s

o do these birds.” The adult birds “slow down their song by increasing the interval between song phrases and repeat individual song elements more often when singing to juveniles,” and the study found that “juvenile birds pay more attention to this ‘baby talk’ compared to other songs.”

Human babies are wired at birth to learn the first and last syllables of words, researchers in Trieste, Italy have discovered. Their study, reported in ScienceDaily.com, found that “newborn brains are full of feverish activity and that they are are already gathering and processing important information from the world around them. At just two d

ays after birth, babies are already able to process language using processes similar to those of adults … they are sensitive to the most important parts of words, the edges, a cognitive mechanism which has been repeatedly observed in older children and adults … In real language there are signals, like prosody or very subtle pauses, that cue the boundaries between words and phrases.”

We don’t come wired to read, however; that takes learning. Most human enterprise relies upon, or could be

nefit from, book learning. And people who enjoy reading make better readers. The better a child reads, the greater likelihood of their success in life. The very best way to encourage a lifetime of reading for pleasure is for you to read to them daily from day one, and for them to see you read regularly for the fun of it.

The Doorway to Reading is one of the great missions-cum-nicknames our public libraries possess, along with The People’s Unive

rsity. People of any age can love reading; it’s simply a matter of finding interesting books and spending some time reading something fun, however you define that. Because when it comes to reading, you CAN teach an old dog new tricks.