adbury once wrote, “A book has got smell. A new books smells great. An old book smells even better. An old book smells like ancient Egypt.” Of course, some books are smellier than others. Scientists say those odors are caused by volatile organic compounds, or VOCs, that comprise the book’s paper, ink and glue. According to IFLScience.com, “over time, the VOCs break down, releasing the chemicals into the air.” Book VOC’s aromas include “hints of almond 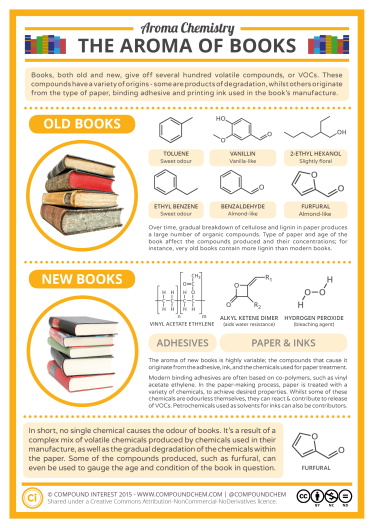 ,” “notes of vanilla,” and “a light floral fragrance.”

As librarians know all too well, “the book can also retain some odors it has been exposed to during its history, such as smoke, water damage, or pressed flowers between the pages.” I’ve seen raw bacon and lunchmeat used as bookmarks in some returned library books, along with exceedingly personal letters and photos, and money, such as the exact

cash from a permanent fund check.

Sometimes the odors aren’t so sweet, so here’s advice from ILAB.org, the International League of Antiquarian Booksellers on how to get rid of book reek. Find a clean container just bigger than the smelly book, and another, larger container that’s also clean. Inside the larger one put plenty of baking soda, kitty litter, charcoal brickettes, or other odor-absorbing agents. Stand the book upright in the smaller container with the

pages fanned out. Then place it all in the larger one and close the lid. Leave it there for several days or until the smell’s gone.

Stinkiness comes in all shapes and sizes. Consider Lewis Theobald, a British author and editor who lived in the early 1700s and did some important work editing Shakespeare’s plays. One sad day Theobald criticized the new edition of Shakespeare’s works edited by the poet Alexander Pope. Pope was irked and wrote “The Dunciad,” a satire on the contemporary British literary scene. The King of the Dunces was nam

ed Tibbald, one pronunciation of Theobald’s name. Pope included the nastiest gossip on Theobald, provided evidence of his plagiarism and that he wrote anonymous letters to publications in praise of himself. The Wikipedia article on him notes that “Pope succeeded in so utterly obliterating the character of the man that he is known by those who do not work with Shakespeare only as a dunce, as a dusty, pedantic, and dull witted scribe.”

Theobald published a play appropriately called “Double Falsehood” in 1728 claiming “to have based the play on three original Shakespeare manuscripts,” according to a ScienceDaily.com article from last April. “The manuscripts have since been lost, presumably in a library fire.” Ever since Pope’s and Theobald’s era the debate’s raged over who actually wrote what. Then last April “the Shakespeare algorithm” was invented at the Unive

rsity of Texas by researchers James Pennebaker and Ryan Boyd. They “examined 33 plays by Shakespeare, 12 by Theobald, and 9 by John Fletcher, a colleague and sometimes collaborator of Shakespeare. The texts were stripped of extraneous information (such as publication information) and were processed using software that evaluated the works for specific features.”

Pennebaker and Boyd wrote that “the psychological style and content architecture predominantly resemble those of Shakespeare, showing some similarity with Fletcher’s signature, and only traces of Theobald’s. For example, the researchers’ software examined the playwrights’ use of function words (e.g. pronouns, articles, prepositions) and words belonging to various content categories (e.g. emotions, family, sensory perception, religion). They had the software identify themes present in each of the works to generate an overarching thematic signature for each author.” They also examined the plays for “categorical writing.” Categorical thinkers “tend to be emotionally distant, applying problem-solving approaches to everyday situations. People who rate low on categorical thinking, on the other hand, tend to live in the moment and are more focused on social matters.”

I won’t guess where I am on that spectrum, but will take my stinky, old beat-up Riverside Edition of Shakespeare’s works with me to read at Fairbanks Shakespeare Theatre’s 17th annual Bard-a-thon that’s going on round the clock all this week at Raven Landing. I’m aiming to read “All’s Well,” where the clown says, “Indeed sir, if your metaphor stink, I will stop my nose; or against any man’s metaphor.”