The world’s rich in irony if you’re aware of it. Take the word “mindfulness,” for example. A recent KUAC radio program featured a book about being mindful while eating, which reminded me that mindfulness was something I intended to write about, along with new ways to improve and reduce

one’s memory. “Mindfulness” was the focus of Virginia Heffernan’s NY Times article last month in which she said the term may be new-sounding and trendy, but compared with other neologisms, like “affluence,” “selfie,” and “impactful,” in which “notes of cynicism and cutesiness come through, “mindfulness” is a useful addition to the lexicon, and it’s durable.

“It looks like nothing more than that the noun form of ‘mindful,’ but ‘mindfulness’ has more exotic

origins. In the late 19th century … a British magistrate in Ceylon (now Sri Lanka), with the formidable name of Thomas William Rhys Davids, found himself charged with adjudicating Buddhist ecclesiastical disputes. He set out to learn Pali, a Middle Indo-Aryan tongue and the liturgical language of Theravada, an early branch of Buddhism. In 1881, he thus pulled out ‘mindfulness’ – a synonym for ‘attention’ from 1530 – as an approximate translation of the Buddhist concept ‘sati’ … Sati, which Buddhists consider the firt of seven factors of enlightenment, means, more nearly, ‘memory of the present.’”

Flash forward a century, and “Jon Kabat-Zinn, a molecular biologist in New England and a longtime meditator in the Zen Buddhist tradition, saw in Rhys Davids’ word a chance to scrub meditation of its religious origins. Kabat-Zinn believed that many of the secular people who could most benefit from meditation were being turned off by the whiffs of reincarnation and other religious esoterica that clung to it.” His definition, “the awareness that arises through paying attention on purpose to the present moment non-judgmentally,” see 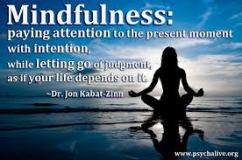 ms to have stuck.

Whether I’ll remember to meditate’s another question. So I read ”Closing Your Eyes Boosts Memory Recall,” a ScienceDaily.com article from last January, with special interest. It described a University of Surrey (UK) study that “found evidence that eyewitnesses to crimes remember more accurate details when they close their eyes.” The researchers also learned that “building rapport with witnesses also helped them to remember more … Although closing your eyes to remember seems to work whether or not rapport has been built beforehand, our results show that building rapport makes witnesses more at ease with closing their eyes.”

But what if you want to forget? A May 2014 Smithsonian Magazine article by Richard Coniff sated that “the best way to forget an alarming memory, oddly, is to remember it first.” Sufferers from post-traumatic stress disorder “are often asked by therapists to recall the incident that taught them the fear in the first place. Stirring up a memory makes it a little unstable, and for a window of perhaps three hours, it’s possible to modify it before it settles down again, or ‘reconsolidates,’ in the brain. Reliving traumatic moments over and over in safe conditions can help a person unlearn the automatic feeling of alarm.”

This works better with recent traumas than older ones. However, a new drug, histone deacetylase inhibitors, or HDAC, “boost the activity of genes in ways that help brain cells form new connections … The HDAC inhibitors alone had no effect, but drugs and therapy together seemed to open up and reconnect the neurons where long-term memory had been locked away.” Meanwhile, University of Alabama at Birmingham researchers are exploring how the brain remembers pleasurable experiences, especially addictive ones.

ary’s loaded with self-help books intended to help improve memory, eating healthy, getting exercise, being organized, leading others, etc. Self-help books have been popular since Samuel Smiles invented them in 1859. Although already a successful journalist, Smiles’ book, “Self-Help,” sold over 250,000 copies and “brought Smiles to celebrity status; almost overnight he became a leading pundit and much-consulted guru.”

Ironically, Smiles had great hopes for his follow-up book, titled

“Conduct,” but his publisher, John Murray, refused to help. After Smile’s death a copy was found in his desk, but Murray had it destroyed. “The reason why so little is done,” as Samuel Smiles said, “is generally because so little is attempted.”