Every word counts in the world of publishing. Successful short stories writers make less than novelists, since their work amounts to 1,000 to 7,500 words, according to Lee Masterson’s FictionFactor.com, “the online magazine for fiction writers.” She says 100-word-or-less “micro-fiction,” an “abbreviated story is often

difficult to write, and even harder to write well … Pay rates are often low, but for so few words, the rate per word average quite high.” “Flash fiction,” one-page stories of 100-1,000 words are in between micro- and short stories. “In most cases,” Masterson wrote, “industry standard preferred length is 250 words per page, so a 400 page novel would be about 100,000 words.”

The 250 standard originated in the days of manual typewriters. Modern word processors have all sorts of fat and skinny fonts, but, it harkens to earlier, simpler times, jus

t like the “return” printed on your computer keyboard’s “enter” button. Fortunately for our peace of mind, the “Courier New 12 pt.” font, usually the default typeface for Microsoft Word and others, averages 250 words per page.

Writing about word counts provides double pleasure. First, this column has been restricted to 700 words for many years, and this has forced me write more economically, but it’s also fostered an occasional bit of grammatical conniving. Second, the hyphen, that tr

ansformer of two words into one, is my ally, and I employ it with gusto. Masterson’s article provided ample hyphenating opportunities. However, some old stick-in-the-muds, like The Chicago Manual of Style, recommend “a spare hyphenation style.” I can’t argue when the CMS says “to hyphenate only if doing so will aid readability,” but I suspect the CMS and I might define “readability” differently.

This column was inherited back in Seguin, Texas 31 years ago when I became the public library director there. I didn’

t want to take the usual “what’s new at the library,” hoping instead to lure the unwary with amusement. Working in an active library provides a never-ending flow of facts, concepts, and fancies right at one’s fingertips, so I decided to pass some of those along, while slipping in a bit about libraries here and there.

Originally I had no word count limit. At my second library’s town newspaper 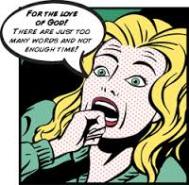 , it was 1,400 words, and those loosey-goosey columns are embarrassing to read today. Some 1,500 columns later, my writing’s improved, but there’s often more I want to share that won’t fit in the approved 700 words. Pictures help, so I’ve added illustrations to a year’s-worth of these columns at my HillofBooks.org. New ones appear there a day or so after running in the News Miner.

Fortunately or unfortunately, I’ve always written away from the newsroom and only heard the faintest of editorial rumblings. The many editors who’ve scrutinized my scribblings have been kind about my persistent use of “y’all” for the second person plural, and countless dangling participles and the like. But, dang it, sometimes colloquialisms read better than “proper English.” I enjoyed a recent Economist.com article by “R.L.G.” titled “A Long D

ecline,” about the imminent collapse of English. It begins by quoting William Langland, author of “Piers the Plowman” who died in 1386: “There is not a single modern schoolboy who can compose verses or write a decent letter.” A Benedictine monk, Ramulph Higden, complained about the same thing in 1387, as did John Dryden in 1672, Jonathan Swift in the 1730s, and many others. Yet, English continues to thrive.

In 1762 Anglican Bishop Robert Lowth published his “Short Introduction to English Grammar,” which is considered one of the most influential grammar guides ever. Instead of merely describing grammar, Lowth tried to applied the strictures of Latin on our freewheeling tongue. It often didn’t fit, but he still told everyone how it ought to be, and many people went along for the next 150 years. That’s right: he’s the guy who came up with the anti-dangling participle rule, among a slew of others, ironically stating, “this is an idiom which our language is strongly inclined to.”

He also had the temerity to castigate the writings of Shakespeare, John Milton, and the King James Bible, some of the noblest ever penned, for “false syntax.” One might say he’s easy to loathe.

The Persistent Importance of Print, Reading, and School Libraries »
« The Secrets of Painters, Bank Robbers, and Social Workers