Old Fort Phantom’s remains stand on a rise just north of Abilene, Texas, where I grew up. We boys usually mis-pronounced it “fathom,” which is an ancient British term meaning “two arms outstretched,” in the sense of encircling with one’s arms, and evolved into a nautical measure of six feet’s length. Fort Phantom was far from the s 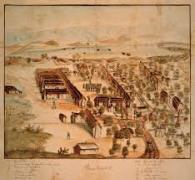 ea and deep in Indian country when it was established on Phantom Hill in 1852. As the overview at FortPhantom.org relates, life was hard and the fort was abandoned two years later. Nevertheless, settlers kept moving into the Comacheria, the huge area stretching from central Texas deep into New Mexico, Colorado, and Nebraska that was dominated by the fierce Comanches. So in 1858 Fort Phantom was re-established as a stagecoach station and Army “subpost.” Only a few stone structures remain, but its ruins made a glorious playground for kids.

How Phantom Hill got its name is debatable. The way I heard it from creditable sources, the first settler’s wife, exasperated by her husband’s continual desire to keep looking over the next rise for the perfect ranch site, said that perfect ranch was a phantom. He stopped and named their ranch “Phantom.” My wife has noted similar occurrences even today, a

nd objective observers must concede “Men Can Really Be Idiots.” That’s the subtitle of a Washington Post article about a British report, “Sex Differences in Idiotic Behavior,” that analyzed the nominees of the Darwin Award

that’s given posthumously to people who die “in such monumentally idiotic ways that the human race … is better off without them in the gene pool.” For example, one winner was the “terrorist who mailed a letter bomb, and when it was returned for insufficient postage, opened it.”

o commit crime, to climb mountains, sky dive, use drugs, take risks, and act impulsively.” We’re seemingly wired that way. “Presumably,” the study’s authors noted, “idiotic behavior confers some, as yet unidentified, selective advantage on those who do not become its casualties.”

MIT exacerbates another male phenomenon: bathroom humor proclivity. Bathroom activities provide disproportionate amusement for guys of all ages. However, age apparently blunts some of the MIT’s impulsiveness, so I’ll only ment 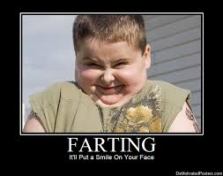 ion three of the “9 Surprising Facts About Flatulence You May Not Know” that Joseph Stromberg wrote about for Vox.com. First, “99 percent of the gas you produce does not smell” because most of it results from swallowed air instead of bacteria off-gassing. Secondly, drinking carbonated beverages and chewing gum enhances the phenomenon.

Third, beware of Beano. It reduces gas production by utilizing an enzyme called “alpha-galactosidase” that digests carbohydrates in your small intestine before arriving in the large intes

tine, where your bacterial pals are waiting to ferment them. Our personal microbiome, the microorganisms inside us that outnumber our human cells ten-to-one, are actually starved by Beano over-use. Recent research is revealing how this little-known part of our anatomi

es is necessary for good health. Anyone with chronic digestive problems should read “The Excrement Experiment” by Emily Eakin in the December 1, 2015 New Yorker magazine. It’s enlightening, disgusting, and available through the library’s databases at (fnsblibrary.org).

f the Sulabh International Museum of Toilets in India. The former’s pretty self-explanatory, involving fans and scent-pads, while the latter educates “students about the historical trends in the development of toilets.”

Vandalism at our library’s restroom dropped an estimated 80 percent when it was remodeled a few years ago with increased lighting, timed toilets and faucets, and stainless steel everywhere. Paper towels tempt some fools to stop up the sinks and toilets, so Dyson airblades were installed that push water off recently-washed hands while saving energy

over loud, inefficient, evaporative blowers. The culprits are seldom discovered, unlike their messes. As Virginia Woolfe noted, “It is far harder to kill a phantom than a reality.”

Old Water, Tear Topography, and Why Geezers Grin »
« Hormones, Peccadillos, and Other Annoyances