Lone Star Ball is my favorite baseball blog, not only because it links to all the latest events surrounding the Texas Ranger team, while including unusually witty quips, but its editors often include links to erudite articles on non-baseball subjects that have the merest whiff of connectivity to baseball. A recent example was about Baron von Munchausen, who was a real Hanoverian Baron who fought as a cavalryman with the Russians 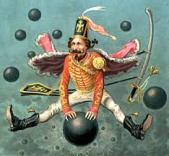 against the Turks in the 1730s and ’40s. Munchausen retired to his country estate in 1760, where he loved to entertain visitors with “highly exaggerated accounts of his adventures in Russia … not to deceive, but to ridicule the disposition for the marvelous which he observed in some of his acquaintances.” For example, he claimed to have visited the moon, been shot from a cannon and been swallowed by a whale.

In normal life, Munchausen had a reputation for forthrightness and honesty, and he was outraged in the 1780s when tales attributed to him were published which were wildly popular, leading to his nickname “Lugenbaron,” or “Baron of Lies.” Turns out a German librarian, one Rudolf Raspe, was behind it. “Rogue” was about the kindest assessment of Raspe by his contemporaries. Throughout the 1760s Raspe rose in

professional prominence, finally working for Frederick II, Landgrave of Hesse-Kassel, the same guy who leased Hessian troops to King George III during the Revolution. The worst sort of librarian, Raspe, “borrowed” some of Frederick’s antique coins under his care, sold them, fled, was captured, and escaped to England. There Raspe pulled off several mining-related swindles, such as salting mines a la E.T. Barnette, and he compiled some of Munchausen’s stories into a book. Raspe had visited Munchausen in his pre-criminal days, and “borrowed” the Baron’s tales. He inflated them even more, and drew upon enough other fanciful sources to publish his book.

It’s been a week for news about interesting old guys. A friend

emailed a video featuring his late hero, “Yip” Harburg, the great lyricist, singing some of his hits, like “It’s Only a Paper Moon,” the depression theme “Buddy Can You Spare a Dime?,” the songs from Wizard of Oz, and many more. And my in-laws sent a Facebook story about Antonio La Cava, the best sort of librarian.

ree-wheeled mini-bookmobile known as the “Bibliomotorcarro.” It’s a beefed-up version of the three-wheelers mailmen used in the ’60s. La Cava grew up in the poorest part of southern Italy in a peasant family, and, recalling the simple pleasure of reading books by lamplight, he stocked his Bibliomotocarro with 700 books.

Learning in quick succession about three disparate but noble old guys, and a couple of nasty ones, from blogs, email and Facebook set me to thinking about how cavalier I am in indiscriminately referring to “the Internet” and “the Web” interchangeably. They actually differ quite a bit, but many knowledgeable sources get it wrong.

s the Internet is “a connected group of computer networks allowing for electronic communication.” That’s correct, but YourDictionary.com errs in claiming that the World Wide Web “is another way to describe the Internet.”

The American Heritage Dictionary gets it right with “the WWW is the complete system of interlinked documents that use the HTTP protocol, residing on the Internet, and accessible to users via a web browser.” We Google, browse, surf, etc. the Web, a part of the Internet, but not the Internet itself. Maneuvering around the Internet, which was established in the 1960s by the Department of Defense, is far more complicated than poking about the system of interlinking documents known as Web created by Tim Berners-Lee in the early 1990s.

Modern lives are increasingly involved with the Internet and its World Wide Web, and, therefore, so are modern public libraries. Besides simple connectivity an

d a slew of outstanding on-line research databases, our libraries also provide valuable Internet education and navigation services. That’s no overstatement, for as Ralph Waldo Emerson pointed out, “Tis a rule of manners to avoid exaggeration.”