A recent trip to Indianapolis to attend the Public Library Association conference led to copious entries in the small, plain notebook I habitually carry. Also kn

own as a “commonplace book,” it’s a hodgepodge of observations, ideas, book titles, etc. in no particular order. They originated in the late middle ages, flourished in the Renaissance and Enlightenment periods, when commonplace book writing was taught at the college level. They were kept by many famous thinkers, and in 1706 John Locke wrote “A New Method of a Common Place Book.”

Commonplace books were kept by Emerson, Thoreau, and even Mark Twain. “Cobbled together by literate people,” Arthur Krystal wrote in 2011, “commonplace books served as repositories for whatever someone thought fit to record: medical recipes, jokes, verse, prayers, mathematical tables, aphorisms, and especially passages from letters, poems, or books.” My commonplace books ar 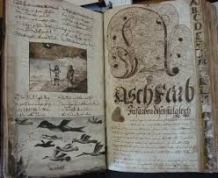 e more mundane than Emerson’s and Twain’s, but theirs probably didn’t include a list of “big things in Indiana.”

Indianians like big things, as my spousal unit and I discovered on our trip to the PLA conference in Indianapolis to promote our library’s Guys Read program. Guys Read won this year’s Innovations in Literacy Award from PLA, and my lovely assistant of 40 years and I met with hundreds of the librarians to show how the program developed here in Fairbanks can attract their 4th grade boys to books and their public libraries.

ig 10 final tournament, plus thousands more costumed in sci-fi and comic books themes in town for a seriously-oversold comic convention, and then throw in St. Patrick’s Day weekend’s traditional alcohol-fueled ribaldry, and you’ll have an idea of the scene.

Library conference sites are chosen for functionality rather than extracurricular activities, i.e. no Vegas. They’re jam-packed with presentations and meetings from early until late, with little time for pleasure-seeking, but we had an extra day for exploring nearby sights. These included a g

Alas, we forewent all, settling instead for the pleasures of the St. Patrick’s Day parade and a visit to the Indianapolis Public Library. The library’s one of the best I’ve seen, but the robust Indianapolis Irish community’s parade was special since I’m a St. Patrick’s Day baby. My sweetie commemorated the event by giving me a T-shirt reading “Hoosier Daddy?” That led to commonplace book reflections about the origin of the “Hoosier” nickname.

The term was popularized by John Finley’s 1833 poem, “The Hoosier’s Nest,” but debate rages over the origin of Hoosier, “the official demonym for a resident of Indiana.” The Indiana.edu site says “The best evidence, however, suggests that “Hoosier” was a term of contempt and opprobrium common in the upland South and used to denote a rustic, a bumpkin, a countryman, a roughneck, a hick or an awkward, uncouth or unskilled fellow … As for the word itself, it probably derives from the Saxon word “hoo” meaning promontory or cliff or ridge or rise or hill.” It goes on to suggest that Hoosiers’ unusual “sier” ending might derive from “scir” the Old English for ‘shire.’ So “Hoo Shire” would be the “High Places,” “Mountain Region,” or even “Hill Country.” Thus, people living in the hills would be “hooscirs” or “Hoosiers,” also known as mountain people and hillbillies.

A 2005 Washington Post article by Paul Farhi, explored the origins of the ubiquitous “who’s your daddy,” tracing its popularity to “Time of the Season,” the 1

969 hit tune by the Zombies in which they asked that question. Its earlier roots are rather scatological. Our house sits high atop Parks Ridge, our surname’s Hill, and I’ve fathered four fine Hills, so the Hoosier and Zombie applications both fit.

However, the Saxon’s “hoo” also meant “anything unusually large,” and that includes Guys Read, for even in Indiana, few things are bigger than getting boys reading.