Some words sort of grab you, like “catgut.” In our youth we were told that our tennis racket

s were strung with it, but the Encyclopedia Britannica states that catgut’s “tough cord made from the intestines of certain animals,” almost always from herbivores and particularly sheep. The Onl 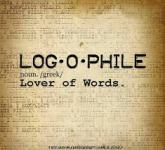 ine Etymology Dictionary said that “catgut” comes from the 1590s term, “kitgut,” with “kit” being an obsolete expression for “fiddle.” Not everyone enjoys chance encounters with expressions like catgut, but logophiles (AKA “word lovers”) do.

Recently I considered words to utilize more often, like “whimsy,” “surmise,” and “vile.” A bunch more cropped up upon reading a whimsical story by Ann Wroe in the Economist titled “Elegy for Lost Language.” Wroe wove in a slew of underused words in he

r tale of a poor shoemaker attending a swanky affair. “As he brushed his recalcitrant hair and tried to pick an accretion of egg from his best tie, Joe wondered by what aberration he had been included in this gathering. He was not a demagogue, despot, gourmand, insurgent, reprobate, or virtuoso. Indeed he was almost their antithesis.”

My “words to use” list now includes juicy terms Wroe used, like “umbrage,” “obfuscate,” “sanguine,” “phlegmatic,” and “probity.” However, there are some expressions I want to avoid, especially “very.” My erudite father-in-law’s library included a 100-page book by a Texas a businessman that listed words that can be substituted for “very,” and for decades I’ve tried to kick the habit of jacking-up adjectives by sticking on “very,” but it’s mighty hard. As noted by DailyWritingTips.com, “the word ‘very’ is ap

propriate in many contexts, but when prefixed to a strong word like ‘chaotic,’ it weakens the expression … With throwaway adjectives like ‘good,’ ‘bad,’ and ‘nice,’ adding a ‘very’ does no harm; it may even contribute a little meaning to mostly meaningless words. But with expressive adjectives like ‘gory,’ ‘heartbroken,’ and ‘chaotic,’ adding a ‘very’ has the effect of diminishing their power.”

ding “very” to boost mamby-pamby expressions such as “quiet,” “painful,” or “serious,” for example, replace them with more oomph, like “hushed,” “excruciating,” and “grave.” The Oxford English Dictionary, with 600,000 definitions, is full of compelling substitutes for “very,” but Roget’s Thesaurus is quicker. Peter Mark Roget, an “eminent 19th century physician, physiology expert, mathematician, inventor, writer, editor and chess whiz,” according to the article on him from Merri

am-Webster.com, was also a logophile’s logophile. He completed the first draft of his Thesaurus in 1805 at age 26, but didn’t publish it until retiring 43 years later and working on it nonstop for four years. Then he continued tinkering with it until his death at 90.

ated “a reverse dictionary. With a dictionary, the user looks up a word to find its meaning. With ‘Roget’s,’ the user starts with an idea and then keeps flipping through the book until he finds the word that best expresses it.” He divided all knowledge into 1000 “concepts” grouped in six “classes”: abstract relations, space, matter, intellect, volition, and affections. Fortunately, just before publishing the first edition of the Thesaurus, Roget added an alphabetical appendix “thus enabling readers to use the Thesaurus as a conventional book of synonyms, without necessarily having to delve into its complex philosophical underpinnings.”

oke information down into its components, or “facets”: its broad subject area, personality (the something in question), matter (what it’s made of), energy (how it changes or evolves), space (where it is), and time (when it happens). He used colons, semicolons, and commas to divide the facets. For example, a 1950s book about research into curing tuberculosis of the lungs in India using x-rays breaks down into “medicine” (the book’s broad subject), “lungs” (personality), “x-rays” (matter), “research” (energy), “India” (space), and “1950s” (time). It’s colon call number is L,45;421:6;253:f:44’N5.

Like Roget, the new FNSB library catalog facilitates getting your intellect around

huge amounts of information. For that matter “facilitates” is another expression worth trotting out on occasion. As Evelyn Waugh noted, “one’s vocabulary needs constant watering or it will die.”

One thought on “Catgut, Logophiles, and Peter Mark Roget”